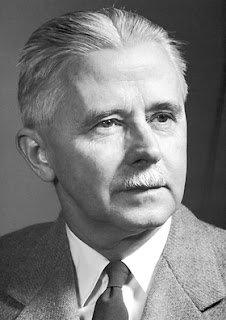 Haldan Keffer Hartline (1903–1983) might always have been destined for a life in biological research [1].  His parents were highly educated teachers at the Bloomsburg State Normal School in Pennsylvania; his father was a field naturalist with a Masters degree, with experience at the Cold Spring Harbor marine biology station and who studied for some time in Bonn and Heidelberg.  His mother, an English teacher at the school, also had a keen interest in botany.  From early on, Hartline had a researcher’s attitude towards natural phenomena in which others might have taken only a passing interest: after observing that bright sparks rising from a fire left shorter trails than dim sparks, he began experiments at home to explore persistence of vision.
As an undergraduate at Lafayette college (ca. 1921) he began working with small land isopods (small woodlice), quantifying their light-avoidance behaviour.  This early research led to his first published paper at the age of twenty [2].  While studying medicine at Johns Hopkins University, he was allowed access to the Department of Physiology’s string galvanometer — an enormous device for recording extremely small electrical currents.  Hartline used the instrument to record retinal action potentials in small vertebrates.  One day he caught a fly that was buzzing around his laboratory, and mounted his electrodes to record from an ommatidium — Hartline quickly found that retinal potentials from the fly were ten times larger than those in the cat, and shifted his focus to visual responses in invertebrates.
Hartline began his work with the horseshoe crab Limulus at the Woods Hole marine biological station, where he continued his research on shadow reactions and dark adaptation in small marine creatures.  Unsatisfied with the mechanically-amplified responses of the string galvanometer, he built his own three-valve amplifier from scratch to drive a Matthews oscillograph [3].  The increased sensitivity allowed Hartline’s work on retinal action potentials to progress to recordings from single fibres in the Limulus optic nerve.  After quantifying the responses of single units to spots of illumination, he noticed that ambient light in the laboratory reduced the responses of an ommatidium and attached fibre prepared for recording.  It was a short step to show that shading neighbouring ommatidia restored the activity of the isolated fibre.  Hartline and his lab explored the dynamics and mechanism of this phenomena as an early description of lateral inhibition in the retina (beaten to print by Kuffler working in the cat and Barlow in the frog) [4, 5].   Such was their zeal in precisely quantifying the effect of lateral interactions that they produced a set of simultaneous equations that accurately describe the responses of a set of nearby ommatidia.
Two productive decades followed their initial observations; their work cemented the idea that the retina does not merely transmit counts of incident photons to the brain, but actively filters and processes incoming stimuli.  The visual phenomena of Mach bands (see figures at left) illustrate that our perception of the visual world is illusory from the moment of sensation.
Based on the work of Hartline and others in the retina, the concept of lateral inhibition has been extraordinarily pervasive in neuroscience.  Models describing not only visual processing [8], but also development of cortical maps [9] and dynamic activity in cortex [10] all stem from Hartline’s observations.  In the retina, lateral inhibition underlies spatial and temporal contrast enhancement, as described in detail by Hartline and his colleagues.  In networks of neurons, lateral inhibition can perform sharpening of neural representation, decision making via competitive mechanisms, auto-associative memory storage, noise rejection, and so on [6].  Many abstract models of cortex adopted widespread inhibition as an anatomical fait accompli, and continue to do so in spite of the weight of evidence against long-range inhibition in cortex.  Aside from consistency with existing theoretical literature, this is probably due to the computational power conferred by lateral inhibitory interactions.
Hartline was awarded the Nobel Prize in Physiology or Medicine in 1967, along with Ragnar Granit and George Wald, for his “discoveries of the most fundamental principles for data processing in neuronal networks which serve sensory functions. In the case of vision they are vital for the understanding of the mechanisms underlying perceptions of brightness, form and movement.” [7]

Mach Bands In the 1860s, the Austrian physicist Ernst Mach recognised that the illumination at a point on the retina is not perceived objectively, but only in reference to its neighbours.  The optical illusion shown at left illustrates this phenomenon: although there is a simple linear gradient from light to dark in the centre of the image, we perceive a brighter band at the left edge of the gradient, and a darker band at the right edge.  Physiologically this effect is due to the changing influence of surround inhibition across the image.  Mach interpreted this phenomenon quite philosophically, claiming that our perception of the world is always relative to other stimuli; that our impression of unchanging events is actively weakened, with the effect of enhancing the importance of events that change temporally or spatially.
- D.R. Muir
References and further reading
[1] R Granitt and F Ratliff, 1985. Haldan Keffer Hartline. 22 December 1903–18 March 1983. Biographical Memoirs of Fellows of the Royal Society 31, pp 262–292.
[2] HK Hartline, 1920. Influence of light of very low intensity on phototropic reactions of animals, J General Physiology 6 (2), pp 137–152.
[3] HK Hartline, 1974. Foreword. In: Studies on excitation and inhibition in the retina, Eds: F Ratliff and HK Hartline, pp xiii–xx. Rockefeller University Press, New York.
[4] HK Hartline, 1949. Inhibition of activity of visual receptors by illuminating nearby retinal areas in the Limulus eye, Federation Proceedings 8 (1), p 69.
[5] HK Hartline, HG Wagner and F Ratliff, 1956. Inhibition in the eye of Limulus, J General Physiology 39 (5), pp 651–673.
[6] RJ Douglas and KAC Martin, 2007. Recurrent neuronal circuits of the neocortex, Current Biology 17 (13), pp R496–R500.
[7] CG Bernhard, 1968. In: Les Prix Nobel en 1967, Ed: R Granit. Nobel Foundation, Stockholm.
[8] G Sperling, 1970. Model of visual adaptation and contrast detection, Perception and Psychophysics 8 (3), pp 143–157.
[9] C von der Malsburg, 1930. Self-organization of orientation sensitive cells in the striate cortex, Kybernetic 14, pp 85–100.
[10] HR Wilson and JD Cowan, 1973. A mathematical theory of the functional dynamics of cortical and thalamic nervous tissue, Kybernetic 13, pp 55–80.
am 10/30/2012 02:54:00 PM